The Vector Equilibrium (VE) is the most primary geometric energy array in the cosmos. According to Bucky Fuller, the VE is more appropriately referred to as a “system” than as a structure, due to it having square faces that are inherently unstable and therefore non-structural. Its primary role in the vector-based forms of the cosmos. 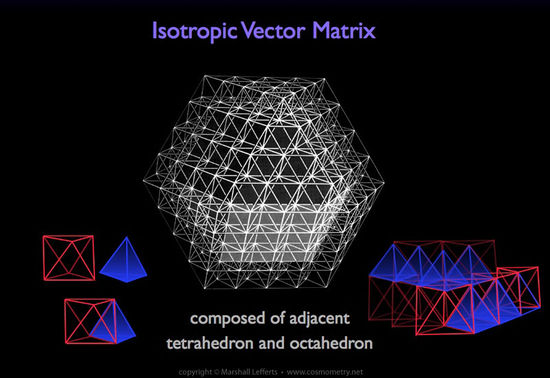 The Vector Equilibrium, as its name describes, is the only geometric form wherein all of the vectors are of equal length. This includes both from its center point out to its circumferential vertices, and the edges (vectors) connecting all of those vertices. Having the same form as a cuboctahedron, it was Buckminster Fuller who discovered the significance of the full vector symmetry in 1917 and called it the Vector Equilibrium in 1940. With all vectors being exactly the same length and angular relationship, from an energetic perspective, the VE represents the ultimate and perfect condition wherein the movement of energy comes to a state of absolute equilibrium, and therefore absolute stillness and nothingness. As Fuller states, because of this it is the zero-phase from which all other forms emerge (as well as all dynamic energy events, as will be described below). In Fuller’s own words.. 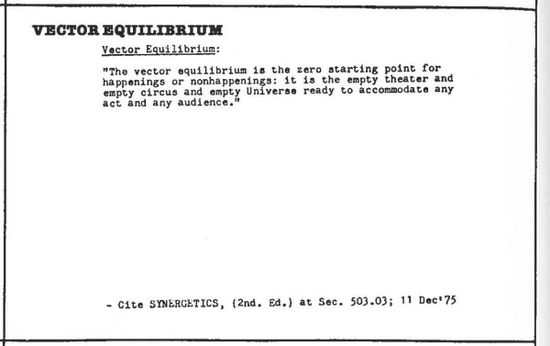 The centres of 12 such spheres define the 12 nodes of the cuboctahedron. … Thus the form can be considered to be a system of equal vectors which are in equilibrium a VECTOR EQUILIBRIUM – where the outward radial thrust of the vectors from the centre is balanced by the circumfer- entially restraining chordal vectors.

The VE also has the attribute of consisting of four hexagons symmetrically arrayed in four planes. As can be seen in the illustration below, there is one at the equator or horizon plane (red), one encircling the whole VE as if being viewed from directly above (blue), and two at left and right-tilting angles (green and purple). They are all 60°s from each other, and the angles they define are exactly the same as those of the faces of a tetrahedron. According to Fuller, this is the zero-tetrahedron, wherein the tetrahedron’s faces have all converged simultaneously on its center point. (It is also significant to note that the 8 triangular faces of the VE symmetrically match the 8 triangular faces of a star tetrahedron as well, this being a polar-balanced geometry of the tetrahedron’s most basic structural form; see the Tetrahedron page for more on this). 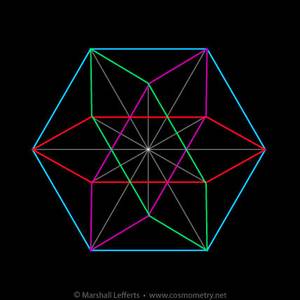 It is because the VE has these four hexagonal planes defining its spatial coordinates (and therefore, too, the IVM) that Fuller says that the foundation of the cosmic geometry is actually 4-dimensional, as opposed to the conventional 3-dimensional 90° X,Y,Z coordinate system historically assumed to be fundamental.